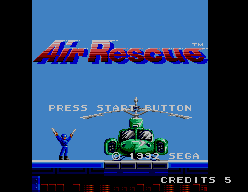 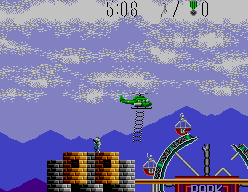 Air Rescue is a Sega arcade game released in 1992 (which runs on Sega System 32 hardware). A Sega Master System game of the same name was released later in 1992, but had little in common with the arcade version. The two games have been seen as an attempt to continue the legacy of Choplifter, which Sega had adapted into a hit arcade game, without access to the brand itself.

Both versions of Air Rescue share a similar concept to the original Choplifter. The player must pilot a helicopter, land it near hostages/prisoners behind enemy lines, and return them to the safety of the base.

The arcade version uses a first-person perspective and features full 3D movement throughout its environment, represented with large numbers of scaled sprites. The player can ascend or descent freely, as well as yaw left and right and move forward and back.

The Sega Master system features completely different levels and a less overtly military theme from its arcade counterpart and should not be considered a port or a conversion as much as a tie-in game. It more closely resembles the classic 2D gameplay of Choplifter, but with levels that scroll in all directions. Air Rescue also features the ability to drop a rope ladder to rescue hostages without landing.